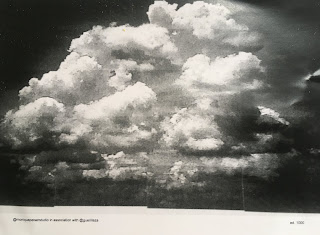 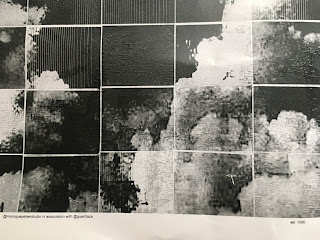 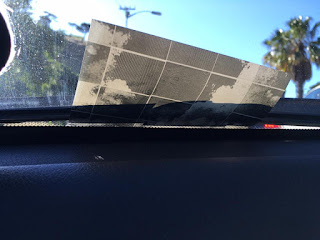 Cloud Series is a performative body of artwork and performative research by Monique Pelser that engages issues of movement, flux and migration through the metaphor of clouds.

Its manifestation in Cape Town's urban fabric comprised two episodes. The first took place at a bridge, a railway station exit, under a flyover and alongside a freeway offramp. These sites of public art intervention were carefully chosen as nodal points of transmission - of things, people and information. At each one, the artist pasted up ephemeral composite images derived from clouds captured in passing on a highway trip and reproduced in low-fi format. The performative interventions were captured in camera documentation and time lapse videos were created (see blog archive).

The quick artistic acupuncture to the public sphere left behind temporary artworks to instigate urban dialogue through surprise and juxtaposition. The following month replica limited edition images were freely distributed in flier format to the public to extend the conversational thread.

Cloud Series contributes to an urban dialogue around public space, access and erasures. The public artworks have since dissipated or been erased. The project forms part of an ongoing body of Pelser's work and will hopefully be extended through an artist book.

"Golden city plan' is a mural intervention in Jeppestown, Johannesburg in November 2014. The mural will be drawn out of gold and silver markers, the gold alluding to the gold mining history of the city. The silver alludes to its bright lights. Its form is that of a city plan. The peculiar thing about this city plan is that the blocks also spell letters of the alphabet. Depending on the viewer's orientation, the letters change, sometimes they morph into other letters, sometimes into a number. The city plan in its ambiguous form and sense changes in its meaning, its behaviour and ultimately nature. The conventions of writing, or the point of the alphabet, the purpose of transcribing, and indeed the purpose of reading, all get stretched to a new and unexpected end.

"This aesthetic locates the city as an urban metropolis embellished with writing among many of its constituents, but the writing in this case is the city itself. The city blocks make up the alphabet that tempt the viewer to construct a word, two words, or possibly a sentence. You might find yourself communicating with the perceived city, or the idea of a city. In this act of searching for meaning or some order in the alphabet, one reconfigures the conventions and a finds a personalised meaning of what a city is, may be, or ought to be.

"Relying on the logic of blocklettering to navigate this terrain of the alphabet, I find a new aesthetic and a new feeling of the city that I share with the city in many ways. I am deciphering the graffiti that embellishes the city, the street etiquette, the lingo, the sounds of foot traffic, the vehicles, the trucks, the taxis, the busses, the police sirens; the smell of food, the smell of urine, the smell oil visible on the tarmac on the streets. It's sunshine piercing through the buildings and its shadows. It's nighttime, and all of it encapsulated in a line to facilitate marking my presence as a part of the city."

For more on this project, visit the blog archive from 2014.


2. Cape Town Under: The Third Voice


-Cape Town, November 2013-Cape Town's historical tunnels briefly turned into a musical instrument on Friday 22 & Saturday 23 November as an artist sang an extended lullaby non-stop for an hour from a series of these subterranean spaces.

The voice of Pauline Theart caught passersby unawares, in particular on the Grand Parade as they made their way home across this public square on a Friday afternoon to catch taxis, trains and buses home. A feminine voice floating up from the underground caught them unawares, and in some cases triggered some raw emotions. A group of schoolchildren remained transfixed until the singer emerged, choosing a later train home to satisfy their curiosity. Some people took up impromptu seats around the open manhole to listen to the entire performance and a range of conversations took place around the open but secured manhole, while many people just came and went, intrigued by the unusual sight and sounds.

Theart's voice also echoed through a series of closed manholes on the rest of the public square and people bent closer to hear the sonorous reverberations emerging at their feet.

Cape Town's tunnels were first built as canals by the Dutch and later enclosed in the Victorian era. Today, they act as stormwater pathways where fresh water flows invisibly under the city from the mountain out to sea.

Theart also performed the same extended lullaby at an open trapdoor into the tunnels, piercing the fortified wall of the Castle of Good Hope. Passersby along Strand Street could catch a glimpse of her standing on a plank across the tunnel interior itself, singing in the direction of the door with water gushing under her feet. Theart's final performance was in a quieter space, on the Castle Lawns, where people gathered around another manhole to look into an empty drop to gushing water below and the sounds of Theart drifting upwards, her voice echoing along adjacent green lawns.

The unique acoustics of the tunnels encouraged the sound to travel upwards to surprise people above ground through the emotional interiors of song. It also looped in the tunnels themselves to create echoes and refrains, in a 'third voice' or what Theart refers to as 'the unforeseen voice'. She performed the lullaby without words, encouraging the tunnel to also speak back in the performance as a way also of acknowledging in the project a third voice.
Cape Town Under was conceived and produced by Kim Gurney in collaboration with Theart as a guerilla gallery project. Gurney said: "We hope this feminine, lyrical song emanating from a stark built environment will intrigue and move people in the midst of their everyday interactions. It is a simple, affective gesture that cues past and present while speaking to restorative futures."

The work formed part of a larger exploration 'LAND' by Gordon Institute for Performing and Creative Arts (GIPCA) at Michaelis School of Fine Art, UCT. LAND was an interdisciplinary project to explore ideas around land and territory through a symposium, exhibitions, interventions and more. This guerilla gallery project is made possible with support from GIPCA.

More information on the one-hour tunnel performances is available at the dedicated project website by guerilla gallery: www.capetownunder.withtank.com and on this blog archive.

-Johannesburg, 11 September 2012-A constantly morphing exhibition that explores ideas around art, law and the media is the first project to be facilitated by guerilla gallery, a newly launched independent platform in Johannesburg.

'APPEAL 2012' is the culmination of a long-term research project by artist Elgin Rust. It incorporates over its two-week exhibition run the creative responses of a dozen other artists to existing 'evidence' around notions of the judiciary and related issues of redress. This material is referenced on Rust's project website and includes elements such as found courtroom furniture:

Participants include Catherine Dickerson, Amber-Jade Geldenhuys, Ansie Greyling, Kadromatt, Ikram Lakhdhar, Kai Lossgott, Leroye Malaton, Agnes Marton, Naadira Patel, Sandile Radebe, Pauline Theart, Mma Tseleng and Marguerite Visser. These invited artists will respond in their chosen medium, ranging from sculpture to video, photography, sound and text. Their artworks include inflatable sculptures, obsolete surveillance cameras, singing and poetry. These will be integrated over the exhibition run into the composite installation, into what Rust terms a final 'judgement'. This joint collaborative visual statement regarding emotional transformation will be fully evident at the exhibition's finissage on Monday 24 September. A previous composite installation in the life of this project looked like this:
The exhibition opens Tuesday 11 September at 18h00 at 3 Buxton Street (2nd floor), Warehouse Building East, Doornfontein with a kwaito set by Kadromatt & Mma Tseleng and closes with a finissage on Monday 24 September.

For more information about the thematics behind 'APPEAL', read Q&A with Elgin Rust.

For more information about the project, visit the dedicated APPEAL website devised by guerilla gallery and this blog archive.